Why learn Spanish by Elisenda?

We speak Spanish from the first lesson!

Interactive workshop to get familiar with some of the most typical Spanish dishes. During the workshop, the students will prepare a few dishes in groups of 3 or 4. Also, the student will learn about the origins of these dishes. The workshop will be organised in the form of a Masterchef contest, where they will have to accomplish several language and culture-related activities. The best team wins!

The workshop starts with a game where students compete in teams about their knowledge on typical dances from Spain and South America, with special emphasis on Cuba and salsa music. The best team gets a price! After, they will learn the basic steps of salsa with a professional teacher from Cuba.

Level of Spanish and duration

Level: These workshops are ideal for groups who have been learning Spanish for at least one year. Eventually, the workshop can be adjusted depending on other levels.
Duration: 1,5h-3h (depending on the workshop)
For more information, contact Elisenda.

"The workshop was a lot of fun because the organizers were all Spanish. We had to put in practice the theory that we had learnt during the past 2 years. The cooking was very nice because of the difficulty. At the end of this day, I felt like I  had been in Spain for a while"(Chris, Christelijk college, Ermelo)

"It was a very fun and educative day. I learned how to prepare paella. The day after, I prepared paella for my family. Our group won"(Alec, Christelijk college, Ermelo)

"We learned to memorize the ingredients. We did a lot of little tests in Spanish. We learned how to prepare different Spanish dishes. It was very educative and fun. Also, I got to know more about the tortilla de patatas"
(Anneroos, Christelijk college, Ermelo) 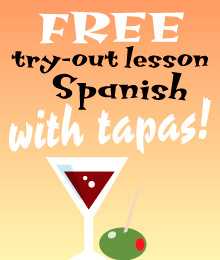